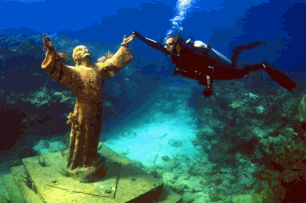 Whatever the true name (and I haven’t been able to definitely locate the truth on this) it is probably the first place that you should look to dive once you arrive in Key Largo the diving capital of the world.

Similarly to other Florida Keys tourist attractions, such as the multicoloured buoy signifying the Southernmost point in Key West, if you can get your photo taken whilst down near the statue then I'm sure that you are going to take the chance.

So let’s give you the lowdown of where the Christ of the Abyss, is to be accurately found, and give you some background information as to who made it, and why it ended up as the image of Key Largo diving, and probably one of the most famous underwater photographs of all time.

Where Can I Find The Christ Of The Abyss Statue?

The statue can be located in John Pennekamp National State Park, which was the first underwater state park in the United States of America.

Opened in 1960, the park is the custodian of the only living coral reef in the United States, and of course is an absolute mecca for diving lovers, who flock from across the globe to dive in its waters.

The statue itself is located closely to Dry Rocks dive site, which is about six miles east-northeast of the Key Largo Cut.

If you are planning on visiting the following coordinates will place you right above the Christ of the Abyss, although 25 feet above it.

How Did The Christ Of The Abyss Get There At All?

Interestingly, the statue was not the first one made by the artist, but was in fact the third cast from the original mould.

The first one, was created by Guido Galletti, after an idea of Italian diver Duilio Marcante who felt that a tribute should be placed in the spot where  Dario Gonzatti, the first Italian to use SCUBA gear, died in 1947 asked for something to be built.

So after discussion it was deemed appropriate for a figure of Jesus, with head and hands raised upwards towards the surface, to be sunk at a depth of 17 meters between Camogli and Portofino on the Italian Riviera in the Mediterranean Sea.

As we say this was the first one to be made, but for us in Key Largo the one that we are more interested in was the third sculpture taken from the original mould.

This was given as a gift to the Underwater Society of America in New York in 1962.

There was numerous places that they considered placing the statue, but once John Pennekamp Park was opened, there was really no other choice better.

So on August 25th 1965, the Christ of the Abyss statue was taken and positioned in its current position 25 feet under water on its huge concrete base, which is not letting it to anywhere.

What Is The Size And Weight Of The Statue?

The statue is nearly nine feet tall, and as its made of bronze frighteningly heavy.

Jesus might be carrying a few extra pounds, around 4,000 to be precise, but it is the concrete base which weighs the most.

The square base that holds the Christ of the Abyss is over nine tons in weight, and has an inscription to the memory of Michael Kervorian who was a pioneer dive shop owner in Miami engraved on it.

So this is one stature that is not going anywhere, unless of course someone is extremely committed in removing it.

Because it is made of bronze it prone to corrosion and after all said and done its in pretty good condition.

What Is The Rest Of The Diving Like Around The Statue?

The diving around the statue as you would expect being in John Pennekamp State Park is good, and is not too deep so is good for snorkelers as well as divers.

The statue can be found on the seaward side of the Key Largo Dry Rocks.

Even though as you can imagine there is a high proportion of scuba divers and snorkellers swimming around the area, the coral is well preserved and is in good condition, allowing it to host a myriad of fish and marine life.

So its not just the statue which is worth looking at through your goggles, but certainly I defy you not to swim across and at least shake the hand of the great man.

Return To Top Of Christ Of The Abyss