Fantasy Fest Is One Hell Of A Party - Come And Join In ! 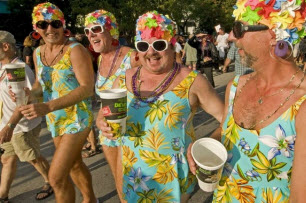 Have no doubt Fantasy fest is the island of Key West's biggest party of the year.

If when you think about the celebration of Mardi Gras in New Orleans, you think music, dancing, and all the colours of the rainbow flowing through the streets, you will have a pretty good idea of what it’s all about.

It has been going for over twenty years as a way of boosting the tourism in October, and it really is one of Florida Keys Special Events that just gets bigger each year.

October was a little limp to say the least, but now it’s a WOW as over 70,000 revellers will hit Duval Street to see the Saturday Night Parade.

The population of Key West more than doubles in October, so to the two businessmen who were local to Key West, Tony Falcone and now departed Bill Conkle, who decided a party was needed to bring in more trade over this nine day event, we have to say “Good Job!!!”

The whole thing starts off on a Friday night with the Royal Celebration Ball, whereby the King and Queen of Fantasy fest are crowned.

The competition to be crowned the King and Queen is open to all, but it’s not something that just occurs on the night.

No way, this is a big thing that starts back in August.

All Rise For The King And Queen!

The competition to be crowned the King and Queen is open to all, but it’s not something that just occurs on the night.

No way, this is a big thing that starts back in August.

The campaign trail is something that is taken very seriously indeed.

The winners are the ones that raise the most money for AIDS Help Inc., and as the big event looms closer the fiercer the competition becomes and the more creative the candidates are.

The final tally takes place at the coronation Ball, whereby the Man and Woman (and we mean this quite loosely as sometimes…..ok, more often than not the Queen is actually a man in drag are crowned and take up their royal status, presiding over the events resplendent in crowns, robes and sceptres.

The whole thing then pours out onto the water with the Fantasy Yacht Race’s Victory At Sea Cup. 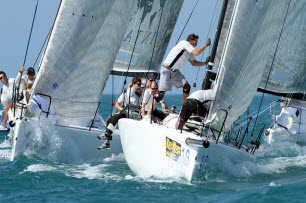 Whereby the Captains show of their sailing prowess in pursuit of the golden cup.

It’s not just the glory they seek; it’s also nice to show the land lubbers you know what you are doing.

The Florida Keys is all about fishing and the sea, so what better way of advertising your boat for hire…..eh??

Not stupid are they!

But beware things can take a sinister turn as on Masked Monday, you may easily find yourself fined for walking along Duval Street if you are not wearing the afore mentioned mask.

The Mask Rangers will seek you out and they are not shy in making an example of you.

Every year the event will focus in on a new theme, which you can see emblazoned on posters and t-shirts promoting the event.

Of course as this is Fantasy Fest you can buy them too.

It is all for a good course after all.

Goombay this is a party in the street running for two days down in the Bahama Village neighbourhood, Key West's Caribbean centre.

The name Goombay comes from the drums covered by tight goatskin, which bang out the constant rhythms throughout the party, and celebrate the history and amazing history of Key West's ever expanding Bahamian population.

The party is not just dancing, but food, beautiful and colourful art, more dancing and a lot of.....ok, even more dancing.

Royal Coronation Ball - As with all coronations this is the home of the King of the Conch's and his conch partner the Queen, and is where they get crowned.

The Pet Masquerade - yeah, it doesn't take a maths degree to know that this is party time for the best dressed pets wearing a costume....mad!

The Masquerade March - during the day the crowds walk en mass around the streets and roads that criss-cross through Key West.

The Fantasy Fest parade - this is the fun and crazy end to the festival.

Return To Top Of Fantasy Fest