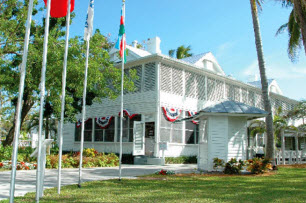 The Little White House first came to prominence back In 1946, when Harry S Truman the 37th President of the United States was told he was suffering from a cold by his doctor.

“Mr President” his Doctor said “You must find a stress-free environment otherwise this cold is going to stay with you.”

So taking his physicians advice, Harry S Truman made his first journey down to Key West, where he settled in what is now known as "The Little White House".

He loved the place and spent 175 days over 11 working vacations in the commandant’s quarters.

The property was built in 1890, but just before he moved in in 1948 it was refurbished and smartened up generally.

You can’t let the President work in a shed now can you!

However although this was supposed to be a place to get away from things, you can’t take the stress away from the world of the President, so things did get a bit hectic at times even in Key West.

The Joint Chiefs of Staff planned to meet up at this house in 1948, to begin the creation of the Department of Defense.

While here, President Truman got together with some of his top guys and talked about such weighty topics as the plan from Marshall to start rebuilding Europe, how to bring in the Truman Doctrine that single-handedly realigned American foreign policy, and also to finally recognize the State of Israel.

Insisting all the time that he was taking a break from Presidential matters, Truman admitted in letters back to his family that he was working.

He actually reckoned that up to 600 times a day he would sign official business...it was hard to stop being the President as you can imagine.

Although the house did start to get a bit shabby, when it was opened up to the public in 1991, a lot of time and energy was spent making sure it was just like “Give ‘Em Hell Harry” would have recognized if he came back for a visit.

It is not a huge property, but you will be able to visit the family quarters, poker porch, dining room, and living room, where Truman would sit and play the piano.

And what make it even more fascinating are the pictures and stories that are told of the other Presidents that have stayed there.

Even later Presidents such as Jimmy Carter (who stayed here twice in 1996 and 1997) and Billy and Hillary Clinton have all rested in the Little White House, so it’s no wonder that so many tourists flock through its doors daily.

The guides who conduct the tours exude enthusiasm and really bring the home to life.

It’s like Harry S Truman has just popped out the shops and will be back any minute, such is the informal ambience of the whole place.

A 10 minute video recounts the history of the home, and collection of Presidential memorabilia is on display in the museum gift shop.

For anyone interested in US history then when you come down for a visit to Key West Little White House is a must.