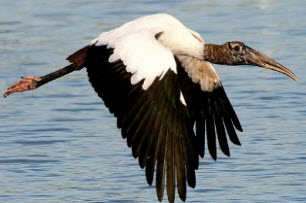 The image of the Wood Stork for many who live in the Florida Keys, is a common sight.

The long legged, white bird standing in the shallow waters and swamps across the state of Florida has been an image that has been one that generations of Floridians would recognise.

But this could easily have been a very different story.

Throughout the world, the stork can be seen, with 17 species documented to date, but it is in the United States where the Wood Stork reigns supreme, and is the species that is regularly seen in our waters and countryside.

But infact due to several factors the Wood stork could have gone the way of many of the large American wading birds who found their numbers decimated in the early 1900’s.

But what was the reasons for this?

What was different about the Florida Wood Stork, that made them walk (or wade) a reasonably easy path through the pages of Florida’s history books?

And lastly, what is making this rosy tale of endurance move into a distinctly darker phase, which could unless something is done to protect the Wood Stork, make them one more natural element that is no longer with us today?

So on this page we will aim to provide the most detailed information we can starting with ...

Description Of the Wood Stork

The Wood Stork or to name it by its official latin name (Mycteria americana) is a distinctly large and impressive bird.

The bird can be seen throughout the United States of America, but its due to its liking of hunting in shallow slow moving waters, many of them find the swamps of southern America and the Everglades of  Florida the perfect location to hunt and live. 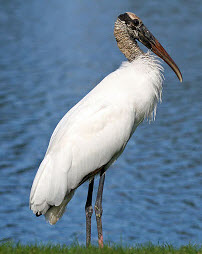 It can be recognised by its large size, impressively curved bill and white feathers.

Whilst it is walking or standing it will look white only, but up in the air it’s easier to see that its plumage is trimmed with black.

It's legs are also quite distinctive, as the legs are a blackish grey colour, whilst its feet are quite pink. Giving it the appearance of wearing shoes….although this would of course be madness.

The head is a dark brown colour, with a black face leading to a large dirty yellow coloured bill.

And it is the head and the extremely long bill that makes it easier to recognise and will separate it from other large wading birds that you might see in the area.

Keep an eye out for a change in the colour of the feathers during the breeding season.

It is at this time that the adults feathers will develop patches of pale pink feathers under the wings, and the feet become even pinker.

The measurements of the bird can range between 83-115 cm tall whilst standing, with a wing span of 140-180cm from tip to tip.

The weight is even more impressive and gives an even greater understanding to the size of the Wood Stork.

The last way of recognising the Wood Stork is linked to their legs.

When they are flying they do not tuck their legs up under the bodies like a lot of birds do, but instead will leave then hanging out behind them.

Other Names That The Stork Might Be Known As

The Wood Stork is the generally accepted name for this Floridian wading bird, although due to the appearance of its head and upper neck, you may also hear of it being called “Ironhead” or “Flinthead”.

They are also called a Wood Ibis or gannet, but this is purely down to its resemblance and not anything to with genetics.

Nesting Habits Of The Wood Stork

The stork is very much a sociable nester, and within the nesting areas of cypress trees found in the wetlands of America, it is not uncommon to see up to twenty five nests next to each other in one tree.

The female will generally breed once a year, and upon the fertilisation from its mate lay up to five eggs at a time.

Both the parents will then take turns to incubate and protect the eggs for about a month before the eggs will hatch and the first stork chicks exit the eggs and enter the world.

This is where their problems start and for many stork chicks they will only see a small time on this earth, and a colony is considered to be extremely successful if each nest manages to produce 1.5 birds from those 5 eggs.

In the early days the Wood Stork chicks need constant feeding to grow in strength and size, and week old chicks will be fed up to fifteen times per day.

This is of course exhausting for the adults who need to find over 400 pounds of fish to keep both themselves and their young nourished.

All the time whilst looking after the eggs chicks and youngsters, the adult storks will be required to fight off the attacks of many different predators that like nothing more than a succulent baby bird for lunch.

The Racoon On The Hunt For A Stork Egg Or Two

How The Population Of The Stork Is At Risk?

As we mentioned at the very beginning of the page, the Wood Stork has walked a reasonably easy path over the decades.

They managed to dodge the hunters who sought out the large tail feathers of many of the large wading birds of America, due to the fact that the feathers were seen very much as a fashion statement for the ladies hats of the time.

However the birds feathers have always been a bit bland, so luckily for them the hunters by and large ignored them.

In 1910, the authorities realising that the quantity of birds in the areas were quickly nearing levels that meant that they were at risk from disappearing all together, started bringing about laws to ensure their protection.

Only ten years ago, this figure had dropped even lower to 4,000 to 5,600 nesting pairs in the whole of America.

It is no surprise then that with these dramatically depressing figures there for all to see, the federal government placed the Wood Stork on the endangered species list, and made its protection a priority.

What Has Been Causing The Decline In The Wood Stork Then?

Although man hasn’t been directly implicated with the decline in numbers of the Wood Ibis due to excessive hunting, as with all things to do with putting nature at risk, humans will be involved somewhere.

The real reason for the decline of the birds is the low reproduction rate that has affected the population.

On average the annual reproduction of a pair of adult birds capable of breeding, is about 0.77 young, which when balanced against all the factors facing the birds, is not enough to increase the population levels satisfactorily. 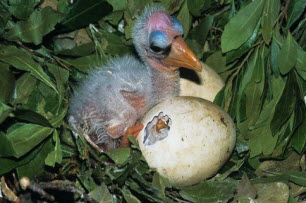 The Chick Waiting For Its Brother...or Sister!

The experts believe that the reason for this extremely low reproduction level is in the main to do with not enough food being available.

And this is where we come into the scene.

The birds feast on fish and small marine life, which flourish in the swamps and wetlands of the southern United States, however much of this area is being drained to develop additional farming.

This is of course, due to the increase in the human population and the need for more food to keep us alive, which is great for us, but bad news for the poor old bird.

So take away the water, and subsequently the fish population is at risk, and the effect on the eco system is altered drastically.

When a Wood Stork is undernourished, then similar to all animals and even humans, the desire to reproduce is lowered.

The last thing you want to do when you are starving is to mate……..give me a burger anytime of the week.

But that isn’t all that us human do either.

Due to an increase in logging, the natural environment that the birds nest in is also being taken from them, so they don’t really stand a chance really.

Many of the cypress trees that historically have been a favourite nesting place are disappearing, leaving the Wood Storks looking for other places to nest.

And most of the time, they will set up on man-made structures that can often be disrupted by agricultural or industrial machinery.

All of these factors when combined can have a devastating effect on any species clinging to survival, but when it comes to the wood Stork, they have another factor that has over the last few years come into play and once again are threatening the survival of these huge birds. 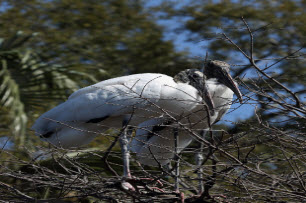 The Natural Predator Of The Stork

Over the last decade or so, a huge predator has made its way into the realm of the stork which had never been a problem previously.

During the nesting period the two adult birds will fight off attacks from predators such as grackles, skunks, vultures and even racoons, who have been known to consume a whole colony from a tree.

Then upon leaving the nest they can then fall prey to the American Alligator who lurks within the waters and backs of the swamps and marshes. 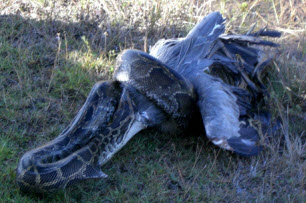 The Burmese Python Grabs Its Lunch

But now an influx of Burmese pythons have made themselves at home in the perfect conditions that the stork feed in.

Within the years 2003 to 2008 over 25% of the pythons captured in the Everglades were found to contain bird remains in their stomach, and unfortunately for the stork they would not consider a 10 pound bird as being something that they couldn’t grab and eat.

As the pythons continue to flourish, so the levels of wood ibis in the  Everglades are required to be monitored closely, as all the factors mentioned previously added to the threat of these huge snakes can bring an end to these wonderful birds.

Return To Top Of Wood Stork