Key West Aquarium Will Have You Saying "Tanks Very Much"! 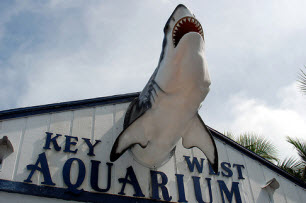 The Key West Aquarium is Key West's Oldest tourist attraction, and one of the whole of Florida's oldest aquariums too, which means it must have something going for it.

And I can confirm that it most certainly has “A Lot” going for it.

In typical aquarium fashion the place allows you to experience the same fish and environments that our divers see around the coasts of the Florida Keys shoreline.

Many of the species that are renown for being natives of the Keys are resident within the aquarium, so sharks, turtles, jellyfish, stingrays and even Florida Alligators are all in attendance.

The “gators" are brought down to the aquarium from the alligator farm in Homestead Florida, and then returned when they get too big for the attraction to deal with.

Don't want one of these bad boys, starting to get a bit stroppy, and deciding they fancy a bit of a walk around.

Nope, keep them nice and small and then send them back.﻿

Sounds sensible to me!

This has been created to look like a mangrove lagoon, and you will find local fishy friends such as the tarpon, barracuda, game fish and sea turtles recognise the hands that feed them and come splashing to the surface.

The Touching Pool Sharks Waiting For Your Hands....Brave Enough?

How Long Should I Plan To Be In The Key West Aquarium For?

Being such a small attraction you can whizz through quite quickly if you want to, but I would recommend strolling around the tanks quite leisurely and really taking your time.

And we would certainly recommend that you try to get on one of the Key West Aquariums guided tours that occur four times daily if you can.

These tours are great, as you will definitely be in the right position when it comes to the feeding times too.

So if you fancy seeing the sharks go mad,(and who doesn’t like to see a bit of Jaws type of action), the stingrays, the sawtooths all flapping and splashing around to get their dinner then you will be in for a treat.

The tours take about forty minutes, and will provide so much more information than just reading what's on the tanks.

The guides love it when the kids get really involved and ask lots of questions, and don't think the oldies can't ask a few things too.

So lets all be kids and really get into it.

If you don't fancy taking one of the tours then you will probably be done and dusted in about an hour.

Does The Key West Aquarium Have A Bit Of History?

Most things in Key West have a bit of a history, and certainly the aquarium is no different.

It was originally built back in the Great Depression between the years of 1932 and 1934 where because of the state of the economy, the federal government were looking for more ways of bringing people and their cash to the island of Key West.

Nowadays, you would think “Why wouldn't you want to visit Key West”, but that wasn't always the case, so the government employed the Works Project Administration (WPA) to build the attraction and hopefully do what attractions are built for.......attract tourists and lots of them.

Interestingly, originally because of the weather the Key West Aquarium was built as an outside open-air attraction.

However the whole thing didn't last long, as due to the big hurricane of 1935, and the later war, it stopped being an attraction and was taken over by the forces as a rifle practicing site.

But it wasn't until 1946, that the Key West Aquarium started moving back towards becoming the attraction that it was first meant to be, although with a roof which was added in 1960, as the sunlight was causing a problem with algae growing on the glass.

Where Is The Key West Aquarium To Be Found?

The attraction﻿ is located at the corner of Front St. and Whitehead St. in historic Old Town Key West.

So just simply ask anyone in Key West for directions to Mallory Square and you will find it there.

The good thing about this, if you plan to go to the attraction mid-afternoon then you can pop straight across the square and join in with the Sunset Celebration when you come out, the place to join the entertainers and revelers there to witness the world famous Key West Sunsets.

Make sure you try to book your tickets online as you do get a discount.