Weather In Islamorada Is Nearly Perfect, But Which
Month is Best To Visit?

If you are wondering what the weather in Islamorada is doing at the moment, just take a look out of your window.

Well it is highly likely that it will be a lot better than you’re experiencing which makes it a hugely popular area to vacation in.

On this page we will break down as many areas of information regarding weather in Islamorada for you as we can, so make sure you look at rainfall, temperature, current weather, hurricanes, floods (ok not floods)but as for the rest…..yep we have the lot.

But I suppose the first thing that most of you will want to know is what the weather in Islamorada is like at the moment.

So take a glance at the chart to the right of where you are reading, for the next seven days.

But even if it looks a bit gloomy, don't worry, as you'll see below, the majority of the time it is anything but.

Because of the sea breezes that blow across the Florida Keys from the Gulf of Mexico, you will generally find that temperatures are considerably lower than up on the mainland of Florida.

For anyone that has carried an exhausted child around the parks in Orlando will know, the temperatures can be energy busting and severe.

However the weather in Islamorada, and I guess the rest of the Florida Keys never gets anywhere like that

And in fact the highest ever recorded temperature in Islamorada was 98 degrees recorded way back in 1957, which added to the fact that you get a nice breeze blowing around you is more than bearable.

The lowest temperature occurred back in 1981, when the thermometers dropped to 35 degrees, which I guess for many people reading this is still a very pleasant day where they live.

Spread across the whole year you will experience an average of 82 degrees, and an average low of 71 degrees.

These of course have exceptions, but on the main that is what you will be getting give or take.

If you are planning on coming to the island, on a rule the weather in Islamorada is warmest in July and coldest in February.

Check out the table below for month by month temperatures 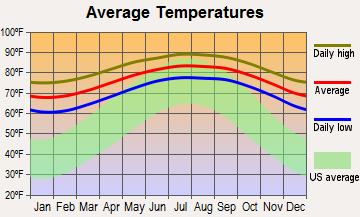 Although as we said earlier the weather in Islamorada is really good, you will still see a fair amount of rainfall during the year.

It can only be expected, due to the way it curves between the Gulf of Mexico and the Atlantic Ocean that a certain amount of precipitation will occur.

And to be honest it wouldn't be half as pretty and green if the rainfall didn't come once in awhile.

The average amount for the year is around 44.82 inches, whilst unlike many areas of the world where summer are the driest months of the year, the Florida Keys finds June as being its wettest.

June will have somewhere in the region of 6.9 inches, which is almost double the months on either side i.e May and July.

The driest months of the year will be December through to March, where it rarely gets above 2 inches per month.

So if you are planning your vacation then the winter months are definitely the ones that pull the crowds in.

This is going to be a very small section, but weather in Islamorada rarely if ever encounters snowfall, which is the same as the rest of Florida as a whole.

Snow rarely falls because, for it to occur a series of complicated weather maneuvers have to fall into place.

Firstly, the polar jetstream must come down the country and move southward through Texas, where it blows into the Gulf of Mexico.

But higher up a cold front needs to linger which then brings its coldness to bear on the Gulf of Mexico, which form the coluds that make snow.

Nah, its not really going to happen.

It could I suppose, but I wouldn't spend anytime packing your snow boots when visiting the island.

Weather in Islamorada is all about shorts and sandals, which is what you want from your vacation.

Sunshine Per Month In Islamorada

So now we have covered rain, temperature and even snow...yeah I know a bit of a waste of time, but still....when you came here looking for the best information on weather in Islamorada then we wanted to give you the lot

We now only really have sunshine, and hurricanes left.

So as you can see below on the chart, you will definitely get your fair share of sunshine whilst you are visiting the island, with the average for the year being 68.1% each month.

But the beauty of the Florida Keys is that even if it is cloudy, then it is generally still going to be warm anyway.

Return To Top Of Weather In Islamorada