The Tarpon -
The Silver King Of
The Florida Keys 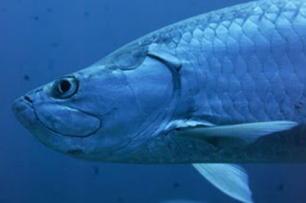 So you want to undertake some Tarpon fishing.

Well you better know what you are up against, as many people claim that the "silver king", as its also known is the worlds most exciting game fish.

But what gives it this title?

What makes anglers travel across the globe to try their luck at landing one of these beasts?

Well for a start this fish will win 9 out of 10 encounters with an angler.

Its lung like gas bladder allows it to take a gulp of atmospheric air from time to time, and this really gives it "superhero" status as the Silver King can survive in oxygen depleted water for ages.

Once the fish feels that a hook has got hold of it, then your difficulties (or excitement dependant on your point of view begins).

It will jump dramatically out of the water thrashing, and twisting, desperate to free itself.

Now if the thought of this acrobatic display gets you all excited then lets look at how much of a battle it is going to be when one takes the bait you've set at the end of your rod.

Most landed are between 25 to 80 pounds on average but can range from a few inches in length to about 300 pounds.

The world all tackle record is 283 pounds 4 ounces.

They are a large, thick bodied fish and generally silver except for its back.

They go by the name of the Silver King, and its not hard to see why when you witness at first hand a fish of this size flying out of the water and into the air.

They have quite a big mouth, that looks like an oven with its front door hanging open, and all across its body it has a sheet of armour made by the thick covering of scales.

If you go out to catch one of these then it will be a day to remember.

The Tarpon frequents the deeper flats of 4 to 8 feet or hangs out in the rapidly moving waters of channels, or under one of the many bridges in the Keys.

Live mullet, pinfish and crabs will entice this hungry, but pretty lazy fish into the current.

And there it waits, comfortable in the knowledge that baitfish will float straight into its mouth.

How To Catch A Tarpon

You can actually catch them all-year whilst fishing in the Florida Keys, and this is especially true in the waters around Islamorada, the worlds premier Sportfishing location.

However you have much more a chance of getting one of these monsters on the end of your line in May and June, when the fish converge on the area for some........fishy business with the ladies.

They swim into the Florida Keys waters from both the Gulf of Mexico, which compared to the Storm hit waters of the Atlantic Ocean where they also visit from are very calm indeed.

The reason for the effort comes down to main reason that we all make extra effort, and that is to breed, although unlike us they have been coming to the same place since prehistoric time.

When the wind is still, and the waters are calm a less than uncommon sight is large groups of fish participating in "daisy chaining," which simply means the fish all swim in very closely grouped circles whilst the males fertilize the eggs that the females are releasing into the water.

The experts, that study marine life reckon that a female will produce a staggering figure of over one thousand eggs at this time.

So how do you actually get one up and out the water?

1 Firstly start with choosing the type of fishing that you will be attempting.

The most popular fishing in the Florida Keys is flyfishing

2 Then select whatever lures, bait or flies you wish to use.

Plugs are are a very popular type of lure, whilst yellow and orange streamers do the trick for fly fishing.

As I'm sure you know, when it comes to bait then crabs or little fish are just perfect for the bait, and will attract lots of bites.

Where To Find The Tarpon.

Look out for the Tarpon when they start to feed just under the surface (they are hard to miss such is their size)or instead make your way down to places where that are a bit more sheltered like under a bridge.

The Florida Keys being surrounded by water have lots of bridges so it makes for very productive fishing spots as the fish gorge themselves on baitfish in the cool shade beneath.

Get your line and cast where you believe the Tarpon to be.

This is where your jig will come in handy, as for best results you need your float to keep the bait around six feet under the surface of the water.

Set the hook a few times as quickly as you can, instead of the normal one quick pull, as by doing this the hook will set better.

Point the rod at the fish when it jumps out of the water.

Enjoy your catch, but quickly return the fish to the water.

The easiest option that has been used for many years, is to grab hold of the Tarpon whilst pulling it's mouth open.

The fish will naturally pull away, and with that it is time to release the mighty Silver King back into the water.

Just make sure that you have taken a few snaps of your catch, to amaze your friends with for years to come.

What Is Their Favourite Food?

Their favourite food without a doubt happens to be the Palolo worm.

They hatch around the waters of the southern Keys once every year.

The worms have a couple of criteria that they have to hit however.

They don't just come when you want them to.

Number One: The worms appear on low falling tides

The worms usually get going and start their slow entrance once it gets dark.

Emerging from the depths of the shallows just offshore, they get caught on the tides and swept out to sea, right into the mouths of the waiting Tarpon It is thought to be an aphrodisiac and give our old Tarpon friends a bit of a romantic boost

So get yourself some Palolo Worm, a nice big rod, some beers and a boat, and have the sportfishing time of your life.

That is what the Florida Keys are all about.

Return To Top Of Tarpon