Florida Keys History
What A Ride!

The Florida Keys history is one linked to the sea.

It's no different from the majority of it inhabitants that earn their living from the waters that surround our Islands, water rules us all.

For hundreds of years the fact that the islands were very much isolated from the mainland meant that nature, more than humans ever did, dictated the Florida Keys History.

That was until one man found a way of linking the islands and changing its fortunes forever.

The very beginning of the Florida Keys history is quite difficult to actually determine.

The first recorded settlers that actually lived on the Keys are estimated at 800 a.d, however many other experts believe that others lived here much earlier.

Although unfortunately the sea has washed away the remains of their homes so we can't really be sure.

The Florida Keys History is full of arguments, as historians cannot agree either on which of the tribes of Native Americans actually spent their time on the keys throughout its history.

Certainly there is talk of the Matecumbes, Calusas, Tequestas, Seminoles and Caribbean Island tribes all being part of the Florida Keys History although there is no truly recognised evidence to back this up. A story of our Florida Keys history has survived throughout the ages that angry and battling tribes who lived on the mainland (Seminoles) and island (Calusa) decided to have one more go at each other.

They fought at the southernmost island of the Keys (Yep, you should know by now that this island was Key West….although it wasn’t known as that by then) and by al accounts gave it a real go.

They fought and fought until the majority of them either laid dead or at least wouldn’t have made it into the next round of “Dancing with the Stars”.

The Spanish who later..ok much later paid a visit to the island found it to be strewn with bleached bones of the dead and probably still angry native Americans called the key Cayo Hueso (pronounced Ky-o Way-so) or island of bones.

It wasn’t the nicest of names for a holiday resort so a little later the Bahamian settlers pronounced the Spanish name as Key West.

Key West was the first of the island keys that settlers found acceptable, and because of its obvious links to the sea, it quickly become a frontier town of the maritime variety.

By the early 1800’s it was boom time for any sea-driven industries, and the West Harbour was packed with incoming and outgoing ships sailing across the Florida Straits to neighbouring Havana.

Most of the time the cargo being transported was fish, but great value was also found in turtles and sea sponges, and because of this ever plentiful bounty of water based commodities the trade between the Florida Keys and Cuba flourished right into the 1870’s over fifty years later.

In 1828, another fifty years on in our story of Key West, the island was

incorporated and so began the descent to the largest and wealthiest territory in Florida.

It reached its summit in just ten years, when if you think the only way to get there was by boat was really no mean feet.

However one man realised that more options were needed, and Henry Flagler began work on the East Coast Rail Road extension, which finished in 1912 and really could mean that Key West was no flash in the pan.

Take a look at how the history of the Florida Keys has entwined around the islands.

In this video the Key West Historic Markers organisation provide an informative look at the island of Key West, from its origins to the present day.

Ponce de Leon was the chap who claimed the title of giving the Florida Keys the name of "Los Martires" in 1513 as he spent his time exploring the waters of the Gulf of Mexico.

You may think that this is a strange name to give the string of islands, but according to stories of old, our man Ponce considered the islands to look like suffering martyrs from where he sat on his ship far out to sea.

The Spanish took quite an interest in the Native Americans who lived there when they first sailed across the Gulf of Mexico to their shores, and this interest continued for centuries.

But one thing the Spanish never did was to try to seize their rocky islands from then.

However from across the waters in Cuba, the priests from Havana tried their best to convert the natives to catholicism.

There are a lot of reasons why they may have done this, but a good guess would be to teach them to be friendly to the Spanish crews that came to their islands.

Being nice to the Spanish, also was a great way of making them not so nice to the English and the French, who for many years had been Spains enemies as they both sought to explore the New World.

So in short the only thing that Spain really wanted from the Florida Keys was to stop anyone attacking their treasure ships, as they sailed back to their homelands.

The Spanish were the first of many to send their ships full with treasures past our islands.

Those Spanish sailors knew only too well that our shores are protected from the majority of the oceans displays of temper by the barrier coral reef, which makes it the perfect holiday destination but a difficult and precarious route to sail.

It was however a quick route home for them.

The Gulf Stream that lies about 45 miles outside the barrier reef, often with the help of bad weather caused ships to run a ground, depositing their valuable cargo across the ocean floor.

For our Native Americans getting their all over tans whilst sitting on the Florida Keys coastline, the frequent victims off the coral reef became something unexpectedly useful for them.

They took advantage of this underwater bounty, and salvaging become huge business in the Keys, and they quickly learnt the ways of the Europeans, and began sailing the 90 miles to Havana in huge canoes.

What did they take with them to Havana?

Well, quite simply whatever they could salvage from the cargo of the wrecked vessels, or by pirating English Ships.

It's not hard to see why the Florida Keys history is full of legend and myths, the past lends itself very nicely to the mysticism of it all.

If you want some more information then the Diving Museum shows Florida Keys History from below the waves brilliantly. 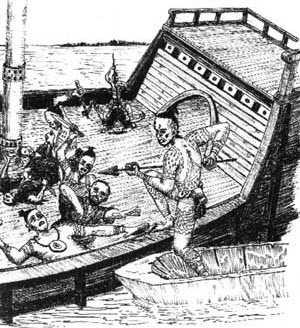 However in the 18th and 19th centuries the same routes were travelled in the opposite direction, as ships sailed from their New England ports to the islands of the West Indies or the Antilles.

Because of the dangers they experienced due to the northerly currents around the Gulf stream, they would sail as close to the shoreline as they dared and often ran aground on the reef.

This meant that their valuable cargos were lost until others could get out to the areas and recover them.

In 1821 the United States finally took possession of the state of Florida and the federal government decided to make Key West the official wrecking and salvaging station, which of course was great news for the economy.

During the boom years of the Florida Keys history, the wrecking industry, 1850 to 1860 nearly one ship per week hit the reefs, with cargo valued at millions of dollars.

Even though many of the reefs that cost ships and their crews their lives throughout Florida Keys history were later marked by lighthouses they remained treacherous, and claimed the lives of many a sailor right up to the modern day.