We Know About
The Florida Keys!
Want To Be In On The Secret?

I imagine that you want to know about the Florida Keys?

Well, don't go anywhere else, because throughout this site we have the most comprehensive information you will find on these wonderful group of islands.

But to get you going, and to give a little taster, the following page can wet your appetite to what we are all about.

The Florida Keys are a group of weather perfect islands which divide the Atlantic Ocean to the east from the Gulf of Mexico to the West.

We say a group of islands, there are actually about 1700 of the things, but hey we don't like to boast.

Think Mickey Mouse and then drive South on US1, until you can't go anymore, and that is where you'll find us.

Right at the tip of the state of Florida.

So let's start with telling you where you're going to end up if you decide to visit.

If you are following the Florida Keys Map, you will see it starts about 15 miles (24 km) south of Miami, and extend in a gentle arc south-southwest and then westward to the hugely fun Key West.

We start in the home of Diving - Key Largo, then go through the fishing capital of the world in Islamorada, Big Pine Key until as we said before you will end down by the Southernmost pointon the Island that is the bustling and vibrant Key West. 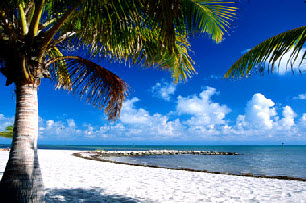 The Island of Key West is the southernmost of the inhabited islands, but it is not the furthest point of America, as if you go another 70 miles across the sea you will find the official southernmost point

Perfect for a day trip, Dry Tortugas is famous for Fort Jefferson, a real life out in the sea fort.

You can choose to either explore the island and then jump back on the boat to go home, or book for a Florida Keys camping experience under the stars that you wont forget. 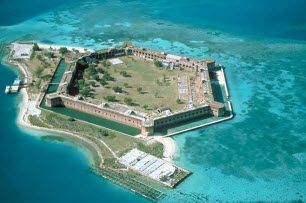 And that for me is the magical thing about the Florida Keys.

The simple things of life take on new meaning, and even though you may have camped before Florida Keys Camping sites do the "Canvas" life like nowhere else.

So you can really plan a day out at the beach, and when the kids get tired instead of a long drive home, you can just slip them into their sleeping bags and let them drift off contentedly.

Whilst you and whoever you are with, sit on one of the beautiful Keys beaches and watch the stars grow brighter than you will have seen them before.

And that simplicity is whats all about the Florida Keys.

Let's get back to telling you about the Florida keys southern tip of Key West.

The streets of Key West, especially the old town are pretty as a painting.

The palm trees that line the streets, provide shade to the gingerbread mansions.

Homes that have remained almost untouched for over 100 years.

The whole place is laid back and relaxed (and would be even more so if not for the masses of tourists that flock to the area), with the resident conchs (pronounced Konk),amiably fitting in with the masses who frequent the bars up and down Duval Street the whole vibe is bohemian and friendly.

One interesting fact about the Florida Keys and especially Key West, is that although it is only 2-by-4-miles long, this island has probably nurtured the talents of more writers per capita than any other U.S. city.

Ernest Hemingway’s former home is open as a museum, and many published authors live in the creative hotpot that is Key West either full- or part-time.

The island is equally famed for its artistic community — with dozens of galleries showing a wide rage of artwork, from the "WOW" to the "I could have painted that" type.

It's hard to believe that, when you visit the island and feel the tropical lifestyle for yourself that this tropical island known as Key West still belongs to America, sitting as it does so far away from the USA mainland that it is just 90 miles (140 km) from Cuba.

If you were to drive back to Miami, you will be covering a distance of about 126 miles. 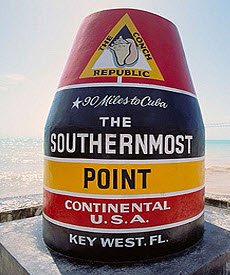 Marking this point is the multicolored buoy at the Southernmost Marker

When you stand looking out across the water, you are actually closer to Cuba than the United States of America.

You can almost smell the cigars!

The island of Key Largo is of all the islands in the Florida Keys by far the longest.

Stretching to a length of 33 miles (53 km) its why the Spanish decided to call it Cayo Largo which roughly translated meant Long Key.

The only thing that many people will know about the Florida Keys island of Key Largo is the film with Humphrey Bogart and Lauren Bacall, it has so much more to offer.

Although if you are a film buff, then you may like to pay a visit to the original African Queen boat, which old Bogey actually steered around in the film.

But to be honest the main thing that drags the tourists into Key Largo is the diving.

It is known as the Dive Capital of the World after all, so they had to be pretty sure that they could live up to that grand title.

And without a doubt they can, as they have probably the best of all the dive sites scattered about the Florida Keys - John Pennekamp Coral Reef State Park — which was the original of all the underwater preserves in the United States — now incorporated into the Keys Marine Sanctuary.

These protected areas feature 55 varieties of delicate corals and more than 600 different species of fish.

Pennekamp Park’s water themed past times include scuba, snorkeling and glass-bottom boat excursions to the reef.

If you don't fancy using the official dive companies, then you can use any of the diving charters that operate outside the park.

They are all excellent and will take you safely to the best diving spots — and a few even feature underwater weddings.

Once the wedding has finished and the guests at the reception have stumbled home a little worse for wear, the bride and groom can go underwater and have a honeymoon in Key Largo's strangely submerged motel with everything that you would expect from a motel, along with a lot of fishy stuff that you wouldn't.

It's great fun and certainly a bit unusual.

One last thing about the Florida Keys longest island is that they don't just rely on nature providing all the entertainment.

Key Largo is also home to the Spiegel Grove, which is an ex American naval ship which was sunk to build an artificial reef.

It is actually one of the largest vessels ever sent to the bottom the sea for this purpose.

So if diving is your thing, then you know where to go!

Islamorada is the sports fishing capital of the world, and it is not hard to see why.

More records have been broken around the Keys in Florida than any place on earth.

At least that is what the International Game Fish Association tell us.

And who are we to argue?

Anglers are really spoilt for choice with sailfish, the unusually named dolphin (which is a fish, not the "Flipper" type),Marlin and the the silver King, the Tarpon,not forgetting kingfish, snapper, barracuda too

They are unlikely to go a day without a catch as they sit on their boats, or on one the hired boats that are available for the day or week.

There are countless charters and marinas teeming with for hire experts, who can take you out and drop you right on top of the fish.

They know the waters like the back of their hands, so are extremely useful if you don't want to come home with just a tale about the one that got away!

Known as the purple island, the thing about the Florida Keys island of Islamorada which really sets its apart from the rest of America, is it has been voted one of the best places to live in the world.

Although of course with that recommendation comes a price.

The cost of real estate is prohibitively high on the island.

Other areas of interest In The About The Florida Keys section

Marathon stretches about 10 miles in length, and conveniently sits in the middle of the 120 miles of sandy beaches and crystal clear blue water at Vaca Key.

To be precise it is made up of several Keys with quite a few of them being really natural and untouched.

The island itself is connected to the Lower Keys by the Seven mile bridge.

One of the most interesting things about the Florida Keys Heart, is it’s where you can find Crane Point.

Now you might be saying "What is Crane Point?" as it isn't one of the most well known places in the Florida Keys, but it is actually a place of great historical importance.

Covering an area of 63.5-acre, the point contains archaeological proof that a whole Indian village once sat on its land, whilst pre-Columbian and prehistoric Bahamian artefacts have also been found.

You won't get that kind of knowledge at Disney World now!!

This island is popular with many Key West and Marathon commuters.

This area probably offers the best value for the money in affordable housing.

And you get to live next door to Bambi too.

What more could you want?

And that is one of the beautiful things about the Keys in Florida.

You will certainly have your choice of beaches to pick, for the lazy days that the Florida Keys are all about.

But we must warn you if you are dreaming of sandy beaches, palm trees and beautiful people strolling around you might be disappointed.

Many of the beaches are actually not sandy at all, more often than not they are ground up coral from the reefs that surround the Florida Keys shoreline.

You can find sandy beaches, such as Bahia Honda and Smathers Beach, but they normally have the sand shipped in every two years to keep it looking like nature intended.

Sorry to ruin the romance of it all for you!!

And whilst we are talking about the Florida Keys, let's tell you about the weather in the Keys.

After all isn't the sunshine what you want on your vacation?

We love to get our legs out!!

And man....the sunsets are to die for!

The weather in the Keys is almost perfect.

Wherever you are sitting at this moment, it's highly unlikely that the weather is better than the weather in Florida.

The thing about the Florida Keys is because of the way the islands slink their way between the Gulf of Mexico and the Atlantic Ocean, the sea breezes and the scarcity of cities allow the temperature to remain.....almost perfect.

Positioned between about 23.5 and 25.5 degrees North latitude, in the subtropics, the Florida Keys are actually the closest place you will get to the Equator whilst still being in America, which means.....come on you should have guessed by now !

Sun tan central all year round!

We love it and so will you.

Wherever you go you'll fall in love with the place.

Wherever you stay then the accommodations Florida Keys style, will leave you quickly phoning your office to see how many days annual leave you have left to take.

We promise you that.

Florida Keys > Guide To The Islands

Return To Top Of About The Florida Keys