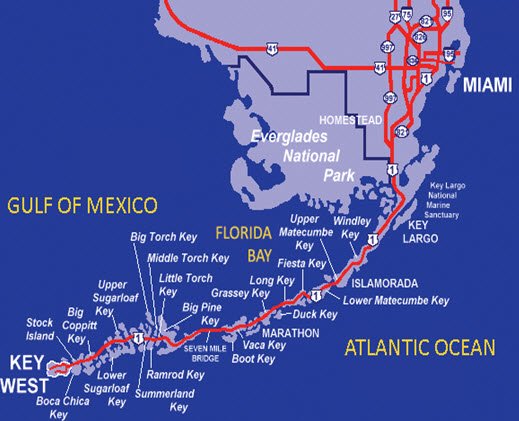 If you sit down and take a hard look at the Map of Florida Keys you can see that the Florida Keys are made up of over 1700 small islands, grouped into the following five main group of Islands.

The islands covering the map of the Florida keys, are connected by 42 bridges, which in turn form the Overseas Highway or US1.

They begin at the south-eastern tip of the Florida peninsula, about 15 miles (24 km) south of Miami, and extend in an arc south-southwest.

They end in Key West the westernmost of the inhabited islands, but go onto to the uninhabited Dry Tortugas.

At the nearest point, the southern tip of Key West is just 90 miles (140 km) from Cuba.

Which really gives them a tropical feel, and it really isn't surprising as the Florida Keys are between about 23.5 and 25.5 degrees North latitude, in the subtropics.

There is only about 5 percent of the Map of Florida Keys that doesn't exist under Monroe County, and this is a tiny little area that goes northeast into the county of Miami-Dade County, which is Everglades territory.

Miami-Dade is pretty much all covered by the Florida City known as Islandia.

Back in the year 2000, when the last full census was undertaken they worked out that the Florida Keys map had a population of 79,535, which equated to 579.27 for each square mile.

I'm not sure how I would feel being one of the .27, but hopefully they feel they have as much rights as a full person!

What makes it even more pleasant, is although this seems a lot of people for one square mile, most of the figure of 579.27 can be found in a few key areas such as Key West, which has as much as 32 percent of the whole population of the Florida Keys.

No wonder its hard to get served at the bars in Key West.

The city of Key West is governed by Monroe County, and these boys work hard to keep it the special place that attracts visitors and residents in their thousands.

To the right of the Florida Keys map of islands, you can see a series of links to take you to a more detailed "Google" map of whatever island you wish to explore.

Or of course you can do what we like to do, and throw the Florida Keys map you have brought with you out of the window.

Turn the GPS off.

And find ourselves in a part of the islands that could very well become your favourite spot on earth.

And that is what the Florida Keys is all about.

It's about surprises, excitement, relaxation and wonder.

You will never look at a map of the Florida Keys again, unless of course you have a plan to catch and you're late!

If you find yourself walking around the Old Town of Key West make sure you leave the car behind for awhile and stroll the streets.

This will give you a chance to explore the map as it was meant to be explored...relaxed and leisurely.

Also....and don't tell the wife, it also give you a chance to pop into any of the fantastic bars that are scattered all across the Key West map, but in particularly down Duval Street.

It’s in the evening that the place really comes alive..well actually it never properly closes its eyes.

It's just that the Key West Nightlife gets even more excitable and the Duval Crawl is something to be experienced.

You may feel rough the next day, but at least you can tell your boss you want to stay for another couple of days. 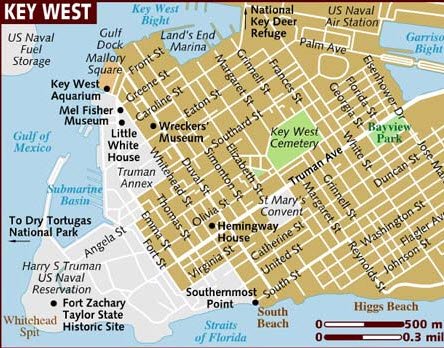 Key Largo is at the top of the Map of Florida Keys.

If you go past the Everglades National Park, and find yourself driving past signs for the only living and natural reef in North America then you should slow down, you've missed it.

And missing Key Largo would be a hell of a shame, as everyone from film producers to the best divers in the world are drawn to the area.

Just the wildlife alone is worth slowing down for.

Key Largo is a great stop-off point to relax and catch your breath after experiencing the hectic but great fun Key West.

This is one place that many people looking at the map of Florida Keys , might suggest you by pass, but it really is worth a look, especially in Key Largo if you are interested in diving.

If this is the kind of thing you love you won’t find better than John Pennekamp State Park, which offers scuba, snorkelling and glass bottomed boat trips.

These are fantastic ways to spend your time. 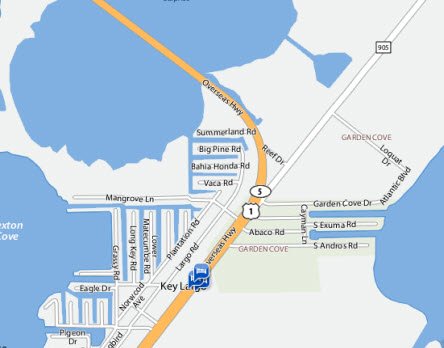 Return To Top Of Map Of Florida Keys