Visiting the Key West Lighthouse is not probably the first thing on your list when you think about visiting the southernmost island of Key West.

It certainly wasn’t mine.

But it has enough facts, and interest, and of course a great view to make more than a reasonable trip if you are looking for something to do whilst in Key West.

With a rich history of shipwrecks, reefs, pirates and sunken treasure around the whole of the Florida Keys, and an extremely high commercial value to the seagoing routes through the Florida Keys, the need for having a Key West lighthouse was always one that was required.

But it wasn’t until the USS navy settled in Key West and established the first naval base in 1823, that the requirement for having a Key West lighthouse was pushed to the front, and the building process started.

However it wasn’t a quick process of erecting the thing, and it wasn’t until two years later in 1825 that the first Key West lighthouse opened its doors, turned on its massive beam of light, and began the process of protecting the shallow and dangerous waters around the coastline.

And that is how it stood, doing its work, with a little help from the able keepers who called it home throughout the decades until in 1969 it was decommissioned.

It wasn’t a case that it wasn’t up to the job, it was just that technology meant that a fulltime lighthouse keeper was no longer required, and so subsequently neither was the lighthouse.

The towering building now simply stands as a museum to Key Wests maritime and seagoing heritage, holding the pictures, anecdotes and detailed history of the lives saved from the Key West treacherous coastlines.

And of course as custodian of the names and memories from all the loyal servants who worked within its narrow skyward pointing building too.

So on this page we will start with where you can find the attraction, opening hours and stuff like that, and then if you are interested, further down the page we will add additional stuff highlighting the history of the Key West lighthouse.

Where Can I Find The Lighthouse?

The Key West lighthouse is to be found down at 938 Whitehead Street, Key West, Florida 33040 which is literally a stones  throw from another of the huge tourist attractions The Ernest Hemingway Home and Museum at 901 Whitehead Street.

If you look at the map of Key West then the area that you should be heading for is not far off the middle of Key West, at least a few blocks from the centre of things.

So you can either walk from one side of the island or wherever you are staying, and it probably won’t take more than about fifteen minutes or so. 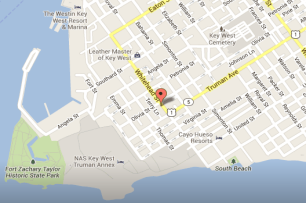 Click Image Above To Go Straight To Google Maps

What Are The Opening Hours For The Key West Lighthouse?

Well they are certainly busy down at the lighthouse, and other than Christmas Day they are open every day.

They open for business at 9:30am and close at 4:30pm daily, but we would  suggest keeping away from the place during the early afternoon, or late morning as the crowds do build up.

Best times to visit would be early morning, lunchtime ( as folks go off to get food from the local vendors and restaurants) or late afternoon, but make sure you give yourself enough time, as the whole visit will take about an hour give or take.

Standing Proudly At Whitehead Street. Although Retired From Duty

Is It A Difficult Climb To the Top of The Key West Lighthouse?

Well, I would be a liar to say that you don’t need a certain amount of fitness, as even the most energetic will feel the pace climbing to the top of the 88 stairs inside the lighthouse.

And it isn’t actually the climb that causes the problem, but instead the tightness of the climb.

With a constant flow of visitors traipsing up and down the circular metal staircase, bottlenecks can form, and some extremely large people (sorry if you are reading this and fall into this camp) can sometimes be difficult to get around which doesn’t make it easy.

There are places to stop and rest however.﻿

Although I suppose that getting to the top of the thing, to see about the best views of Key West that you can find in the area, is the main part of visiting the Key West lighthouse, you can spend your time instead milling around the cottage keepers house where the main exhibition detailing the history and residents of the lighthouse is based.

But I certainly would try my best to get to the very top and see the amazing views across Key West.

You have got all the time in the world as you are on vacation.....or should be as you are down in Key West.

A Brief History Of The Lighthouse in Key West

If we go back to the very beginning of time, or at least when the need for a lighthouse first came about you might be surprised to discover that it wasn't where it is now.

When the Key West lighthouse was first built in 1925, it was much closer to the actual shoreline than it is today, actually about twelve hundred feet away from this one which is really unusual.

Most shorelines over a period of time get eroded away due to the constant battering of the waves and tides against the sand and rocks, but at Key West things are different.﻿

At the southernmost point a huge amount of landfill was done during the building of the naval base, so sensibly it was decided to position the lighthouse were its usefulness was at its highest.....by the sea.

Unfortunately as you will have read on both our pages on hurricanes in the Florida Keys and the history of Flagler and his overseas railroad, in 1935 one of the most terrifying and devastating Hurricanes hit the area and destroyed much of what you would have seen at the time.

Buildings, companies and over 200  were killed, with the hurricane monument at Islamorada moralising the tragic but unpreventable loss of life.

Back in 1846, a similar hurricane blew into town, and although not claiming as many lives thankfully as the one that occurred ninety years later it tore the original lighthouse to pieces and killed fourteen people who had sheltered inside from the storm.

Once the lighthouse was rebuilt, a woman was installed as the keeper of the lighthouse, which may seem not unusual today, but back in the 19th century was almost unheard of.

Mrs Barbara Mabrity held her position with an enormous amount of professionalism, and kept extremely detailed records which are there for us today in the museum.

The Key West lighthouse undertook many different renovations and improvements until in 1969, the grand old lady that had stood for generation protecting the sailors and ships patrolling the Florida Keys waters was brought to an end.

For more information regarding the lighthouse and its history then take a look at the these great resources.

All prices correct at time of writing