Key West Attractions Will Keep You Busy, Entertained..And Out Of The Sun Too!

Many people think of Key West attractions and get stuck with an image of the multi-coloured rainbow buoy, marking the southernmost point of America.

And it’s not hard to see why, as this garish tourist magnet is seen on every website, every tea-towel and snow globe that you can find around the island.

Heck, I even have the image on my website, and more than once too…..it’s hard to get away from it.

But Key West attractions are so much more than this, and with a wealth of history, fun, and the plain bizarre contained in such a small area you really have masses to keep you entertained.

But what is the number one thing that you should see?

What is the thing that with doubt no trip to Key West is complete without, and that I guess would have to be…. 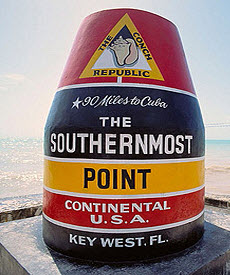 The Tourist Trap Down At The Southernmost Point Of Key West

Yeah, that ugly multi-coloured buoy down at the southernmost point unfortunately.

But once you have done the photos and smiled with everyone else, then the following Key West Attractions are what we consider as the best there is.

They are listed in no particular order and although we will give details of the price to enter, the expense is in no way representative of the length of time that you might be in there.

Unlike the majority of attractions that you find on the mainland of Florida, which take a whole day of heat sapping endurance to get around, Key West attractions are more like a few hours to half a day.

Certainly visits to famous homes who once had famous folk like Harry S Truman the old President, or Ernest Hemingway living within them, are certainly top of the Key West Attractions for many, but they don't take too long to see.

But with these kind of places you will find yourself milling around with quite a lot of eager tourists, snapping away.

This may not be your thing.

But escaping from the crowds and finding some quiet spot away from THE bustling Duval Street and all the bars and joyfulness with a trip to West Martello Towers beautifully maintained gardens, or the only frost free tropical garden in the whole of the America might be right up your street.

So you have loads of choices to make and whether you fancy a trip to a cemetery, garden, aquarium or even a ghostly tour we have the best list of Key West attractions listed, that unlike many websites we have actually been to and enjoyed.

So we hope that you will enjoy them too, and please drop us a line to tell us what you think of them.

Take a close look at the price guide below which indicates pricing of each attraction, but make sure you click through to the websites for up to date information.

You may consider this an attraction that you might want to skip over, but that would be such a shame as it really is a bit of Key West paradise. Read More.....

The name of Ernest Hemingway is synonymous with Key West. The great writer spent several years living at the southernmost point, and did a lot of his most famous work whilst living in the house on Whitehead Street Key West.

Not only did he sit and write, but he also was an avid visitor to one of the other Key West attractions that you have to visit - Sloppy Joes bar.

Read more about his favourite drinking haunt further down the page, and if you want more in depth knowledge about the house Read More.....

Whilst you are visiting Ernest Hemingway's home, you will see this building looming over you just down the street. Originally built after demands by the USS Navy is 1823, the lighthouse protected the Key West shoreline until being decommissioned in 1969. Now Key West attractions like this provide a great historical reference point for visitors and locals alike. And you get a great view from the top too

Higgs Beach is not the main beach in Key West (which is definitely Smathers Beach), but it certainly has enough to make a nice day out.

Whilst you are there you can check out the AIDS memorial, White Pier and the animal sanctuary nearby.

I think that you will be pleasantly surprised by this sandy candidate (or perhaps that should be a sandy-idate) to the best Key West Attractions Read More.....

This is one of those bars, that although you may say what is all the fuss about, you still need to pop in and have a beer to say you have been to Key West.

Most famous for its Ernest Hemingway connections, this bar deserves to be added to the list of Key West attractions, due to its crazy Hemingway Days competitions where folk travel across the world to be crowned that years Papa......which means they look like the famous writer Read More.....

Come on who doesn't like a good scary tale or two? And at Key West you can get more than a couple of weird and murderous yarns, as the southernmost point of America is ranked at number four for ghostly going ons. This is one of the Key West Attractions that can lead into a good night on the town, as they generally commence at 19:00pm and 21:00pm leaving you time to hit the bars and clubs afterwards.

Learn about Robert the Doll, the crazy German count who lived with his dead wife for seven years, and other tales that can make the normal streets of Key West seem......well, its better that you are travelling in a group. Read More.....

Join the crowds of revellers and entertainers who flock to one of the most enduring of all Key West Attractions. This dockside square is jammed night after night for a chance to witness natures free and spectacular light-show (or to have a ice cold beer or two). Read More.....

Interesting stuff to be seen at this free member of the Key West Attractions club. Experts who monitor the weather and of course hurricanes, will show you around the nerve center of weather control. Read More.....

Interesting tours are run every Tuesday or Thursday by the Historic Florida Keys Foundation, or you can grab a guide and make your way around the dead centre of Key West. Read More.....

With fitness fanatics, water sports enthusiasts and families having a great day out, this beach has a little something for everyone. Read More.....

Take a stroll around the streets of Key West at your own pace, by following this official guide of the top 50 buildings and places of significance to be found on the island. Highly Recommended. Read More.....

This is an old styled aquarium, not a patch on some of the fishy places that you might have been to (Georgia's Atlanta one for example...wow!), but it is nicely run, friendly, great for the kids, and Key West's oldest attraction. So the fact that it is still around means that its a place worth visiting....well I like it anyway Read More.....

This little sign is an absolute magnet to the tourists, as it marks the end of US1. Starting 2,390 miles away up in Canada this is one hell of a road, and a pretty rubbish climax. But still the tourists come and snap themselves standing by the side of this green sign. I've done the same thing myself...well you have to don't you. Read More.....

This is a lovely little attraction, but one that can be classed as a little bit pricey, if you have kids that just whizz on through the place. But the butterflies are huge and plentiful and the whole attraction is well built and established. It can get a bit of hot in there though. Read More.....

The Florida Keys exists on a fragile ecosystem, which not being too dramatic is at breaking point. With centers like this highlighting the damage that we can all do, many lessons are learned. But what I like is they do not do it in a preachy way, but an interesting, entertaining and well designed way. Read More.....

South Beach is one of the smallest of the beaches in Key West, but it is extremely popular. Due to the amazingly attentive beach attendant, the restaurant close by, and an easy going atmosphere which is like pure Key West attractions should be. You may find a beach that will make you ignore all the other beaches in Key West. Read More.....

This is a nice way to get your bearings in Key West, and find out some amazing facts about the buildings, and characters that have lived near the Southernmost point. The drivers are great, and entertaining, and like many of these type of trolley tours across the globe, you can jump on an off whenever you fancy it. Read More.....

The ex-president Harry S Truman used this property in Key West as a retreat from the pressures of running the country. But as you can imagine, its hard to escape from such a powerful position, so the house has many stories of meetings, discussions and new laws passed within its walls. This is one of the most visited of all Key West attractions. Read More.....

Created in 1976 this is a really nice little spot away from the crowds that flock around Key West. Not really one of the Key West Attractions that you would say "You have to go to this place", more somewhere to go if you can't think of anything else to do. I like it very much for a place where I can get some shade to cool down in the early afternoon. Take a book, (or kindle nowadays) and just chill. Read More.....